The JACOMO Chorale was founded by Harold Neal, the retired director of the Independence Messiah Choir. The fall of 1983 saw 27 singers gather to begin a new musical group, with performances during the first few years for churches, civic groups, and other private performances. He retired at age 65 and turned the Chorale over to Sue Nichols. Harold Neal passed away quietly in November 2004 at the Groves retirement home, Independence, MO.

Sue Nichols directed the group for two and half seasons, leading the Chorale in fulfilling its mission of providing a variety of music to all types of audiences in the Kansas City area.

Jeffrey Carter directed the Chorale starting January 1989 to February 1998. Jeff and the Chorale presented a wide variety of literature each season. The fall concert generally featured a major work with orchestra. Members of the Chorale and various donors from throughout the community generously supported these performances. A traditional family sing-a-long Christmas concert and a lighter “pops” concert in the spring were also part of the season. Dr. Carter is now the Chair of the Department of Music at Webster University in Saint Louis, Missouri. He is also Artistic Director of the Gateway Men’s Chorus of Saint Louis. Prior to this position he was Assistant Professor of Music Performance at Ball State University in Muncie, Indiana. Jeffrey Richard Carter, a native of the Kansas City, Missouri area. He is a versatile conductor and teacher whose performance experience and training ranges through nearly 1000 years of western musical tradition, and who has gained success with university ensembles, amateur choral groups, show choirs, volunteer church choirs, and specialized organizations.  His performing and educational endeavors have taken him to the continents of Asia, South America, and Europe, in addition to the continental United States. http://jeffreycarter.wordpress.com/jeffrey-richard-carter-bio/ 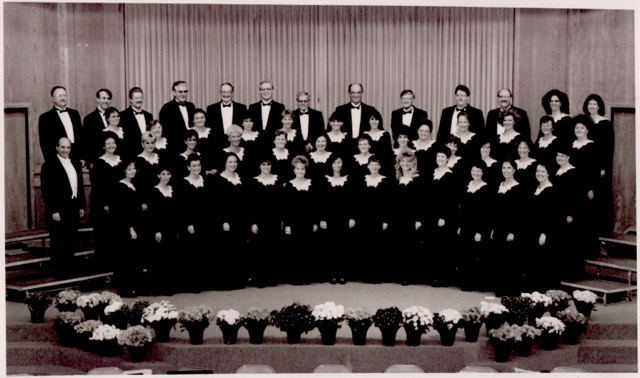 Rebecca became the Chorale’s fourth musical conductor in February 1998. Ms. Johnson holds degrees from the University of Northern Colorado and the University of Nebraska, and is pursuing her Doctorate at the Conservatory of Music at UMKC. Her musical experiences include orchestral and choral conducting, as well as performing as a flutist, violist, and vocalist. She served as interim conductor for the Pride of the Prairie Orchestra in Colby, Kansas, and was the director of Choral Music for McCook Community College in Nebraska. Her choirs have performed throughout the United States and England. She frequently serves as guest conductor, adjudicator, and clinician throughout Nebraska, Kansas, and Missouri. Ms. Johnson is the recipient of the Certificate of Honor from Pi Kappa Lambda and holds memberships in the American Choral Directors Association, the National Music Educators Association, Tau Beta Sigma, and Pi Kappa Lambda. In addition to teaching and conducting, Ms. Johnson sits on numerous community boards and sings with the Kansas City Symphony Chorus. http://mcckc.edu/blueriver/humanities/music/index.html

James L. Wrolstad became our fifth Artistic Director of the Jacomo Chorale. With twenty-five years of experience in music education and performance, Wrolstad brought a dynamic quality to his music which inspires performers and audiences alike.  Wrolstad’s enthusiasm and passion for music is tangible to anyone around him. James L. Wrolstad has completed his doctorate degree in music education at Shenandoah University, Winchester, Virginia.  He is studying instrumental conducting with Timothy Hankewich, Associate Conductor of the Kansas City Symphony.  He teaches orchestra in the Liberty Public School District and is active in his church as a keyboard worship team leader, bass player and vocal soloist.

Skip Frizzell became our seventh Musical Director of the Jacomo Chorale.  Skip Frizzell’s musical experience started with piano lessons when he was 8 years old. The piano teacher charged $.75 and came to the house. His mother took him to hear William Warfield on the Community Concert Series at a young age and he knew he wanted to be a music teacher. He studied clarinet in junior high band, played oboe in high school and was drum major of the band in high school and college. In college he majored in Public School Music with emphasis in flute and voice. He has taught vocal and instrumental music in elementary, junior high and high school with more than 25 years as a high school choir teacher. His high school choirs performed in the World’s Tallest Singing Christmas Tree from 1985 to 1990 and continues today.  In 1986, that Singing Christmas Tree opened Good Morning America. Also in 1986, his school handbell choir performed at the national handbell convention in Bangor, Maine, and his Show choir competed at the invitation of the Young Americans in Hollywood, California. In 1988, his choir performed in Carnegie Hall under conductor John Rutter. He had been president of the Michigan School Vocal Music Association, and was voted Teacher of the Year. He retired from Mona Shores High School in Muskegon, Michigan, in 1990.  During his years of teaching, his high school choirs made concert tours of Europe every three years, living with host families and visiting 29 countries. In 1998, at the invitation of the People to People Organization, he was in the first group of 20 music educators to observe and visit with music teachers and major conductors in China. In 1994, he and Ann moved from Michigan to Independence where he was the Worship Services Coordinator at the Community of Christ Temple. While in Independence he has been president of the Independence Ministerial Alliance and the Independence Music Club. He holds a Bachelor of Music degree from Western Michigan University and a Master of Education Degree from Wayne State University.